We are on the move! Big projects are currently in the works, greatly altering the landscape while enhancing Portage as a great place to live, play and work. These projects will better position Portage to attract new residents along with enriching the lives of current citizens.

Dredging and cleanup of a nearly three-quarter mile section of the Portage Canal is moving ahead with the Wisconsin Department of Natural Resources providing $4.3 million to cover the cost of the work.

The canal, which is listed on the National Register of Historic Places, is a navigable waterway, though it hasn’t been used in that capacity since 1951. From Adams Street to the Canadian Pacific Railroad bridge, the 3,600-foot stretch hasn’t been dredged in nearly a century.

The first phase of the rehabilitation project was completed in 2007 and is shown left. For more information about the nature of future work on the canal, click here. 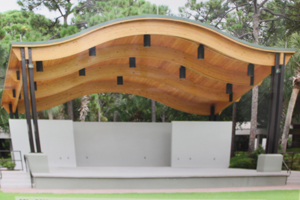 The Portage Service Club Association (PSCA), noted for the successful campaign to bring a Splash Pad to reality, is now undertaking its next goal of constructing a band shell at Pauquette Park. The beautiful signature park in Portage, Pauquette Park serves as the photographic setting for many weddings, reunions, graduations, and, for the past 25 years, Concert in the Park featuring the Wisconsin Chamber Orchestra.

The band shell will provide cover from the elements and potentially attract new events, such as plays and small concerts, bringing many families to the community who will stay shop and eat. The PSCA needs $300,000 to complete the project. Donations can be made payable to Portage Service Club Foundation, P.O. Box 1, Portage, WI 53901.

Just as the band shell would serve as an enhancement to the park, new playground equipment has been installed in several parks in recent months. Pauquette Park equipment is shown during the installation process at right. Collipp-Worden Park not only received a nice upgrade in playground equipment, but also some new basketball courts, including a Dream Court. 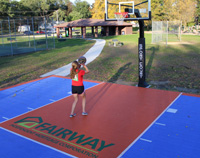 The tennis and basketball courts combined with the Frisbee golf course positions Collipp-Worden one of the top parks when considering the variation of recreational opportunities.

Silver Lake Beach and Sunset Park underwent new playground projects due to a matching grant from the Lenz Charitable Trust to fund $100,000 worth of playground structures at the two parks. Both projects were completed in June 2018. 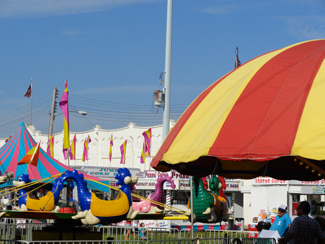 The City of Portage just finished construction of a new 300-foot, fenced, adult softball diamond with a couple other diamonds to follow.

For more information about the project, call the Portage Parks and Recreation Department at 608-742-2178. 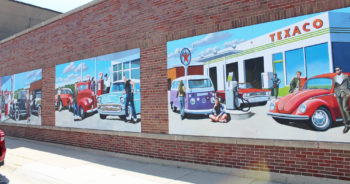 In June 2018, a new mural was installed on the NAPA Building on Edgewater St.
Kelly Meredith painted this mural, the sixth in the art form of traditional mural painting overall in Portage since 2012, depicting three distinct eras of automobiles and gas stations. This follows her previous mural featuring early people of Portage on the Wilz Drug, 140 E. Cook St., building in April 2017.

Thank you to the Business Improvement District, City of Portage Tourism, Portage Parks and Recreation and Tyler Hoel of H & M Contracting.

Portage Center for the Arts 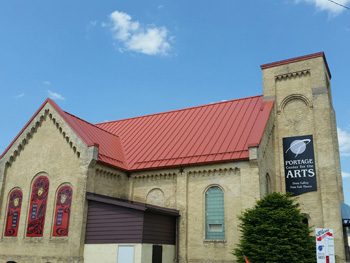 The new roof is in place at the Portage Center for the Arts and looks great! The PCA’s ‘Raise the Roof’ campaign is in full swing, with the goal of raising $400,000 to cover the cost of replacing the aging roof at this regionally renowned performing arts center. If you would like to contribute, please contact the Portage Center for the Arts, 301 E. Cook St., at 608-742-5655. 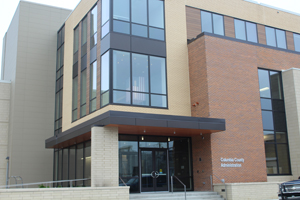 The Columbia County building project is a major construction project that transformed the landscape around the Portage Canal and invites more pedestrian traffic to the downtown. 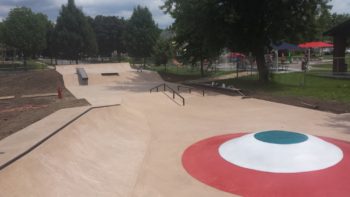 First Phase COMPLETED JULY 2016; Fundraising underway for Phase 2 & 3  – The first phase of the Skate Park, with its concept derived from the sport of curling, has reached completion. The park is located adjacent to the Splash Pad at Goodyear Park. Subsequent phases are planned. 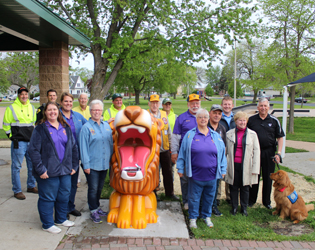 COMPLETED MAY 2019 – The Portage Lions Club worked hard to raise funds for a bubbler at the Splash Pad at Goodyear Park, providing refreshment to the kids and adults who frequent the park. 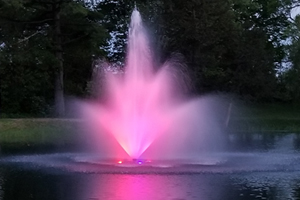 COMPLETED JULY 2016 – The Portage Area Chamber of Commerce has reached its goal for funding a new fountain at Bridal Pond at Pauquette Park.

The park serves as the setting for Concert in the Park featuring the Wisconsin Chamber Orchestra and hosts family reunions, picnics, weddings and more. The fountain and bridges that span the pond have appeared in generations of wedding and senior high photographs.

Completed June 2018 – A $150 million project at the energy plant to install a catalytic reduction system at the Columbia Energy Center, just south of Portage.

A ribbon cutting ceremony on July, 14, 2014 signaled the completion of a prior $627 million project to install emissions reduction technology ahead of schedule and under budget, reducing sulfur dioxide and mercury emissions by more than 90%. 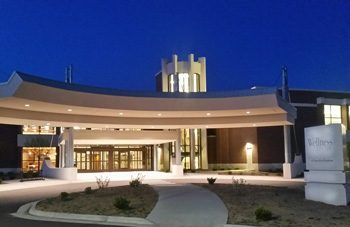 COMPLETED 2013–Portage Public Library has a history of strengthening residents of our community, and now is the time for the Library to become the source of creative thinking and information that can prepare us for life throughout the 21st Century.

The Portage Public Library Expansion project entailed a roughly 6,500 square-foot addition extending to the end of the block, bringing the total library space to approximately 24,800 square feet. The entire children’s area has now moved to the addition. The new story time room has an adjacent craft room with child-sized tables, chairs, counters, and sinks. The new children’s area is now double the size of the old one, accommodating more resources with less crowding.

The renovation of the computer station space increased the number of public use computers. The area that functioned as the Teen Space is now enclosed in glass to create a solarium – a quiet, comfortable area for seniors and adults to sit, drink a cup of coffee, and read a newspaper or magazine. The new design increases the number of meeting rooms from 2 to 6.

COMPLETED, JULY 4, 2013–The Portage Service Club Association saw its goal through! Centrally located in Goodyear Park, the Splash Pad is designed for young children and families. Benches, a shade structure, and a park shelter with restrooms have recently been added.

The Splash Pad will bring many families to the community who will stay, shop and eat. 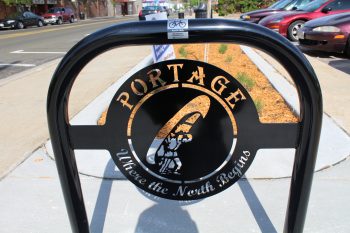 Avid bikers can rejoice! The Portage Business Improvement District and Portage Parks & Recreation Department is busy installing new bike racks in downtown and in parks around town. The Portage Chamber had a hand in designing the logo that appears on the racks. Two colors were chosen for the racks — black for the downtown racks and green for the park racks. The invitation for cyclists to come to Portage and our county is wide open as Columbia County boasts a system of bike loops, including four loops that pass through Portage.  Bike loop maps are available in the Chamber office.

Those enjoying the summer sun at Silver Lake Beach will notice a couple upgrades. The construction of a new Silver Lake Beach shelter, featuring a concession area, changing rooms and storage area, was completed in 2012. A new retaining wall was constructed to replace the old wall in 2015.

COMPLETED IN OCTOBER 2013 – The reconstruction of the Wisconsin River watch house located along the levee walkway.